From February 27th until March 26th, the works of the most important artist of our time “come alive” in the area of ​​Technopolis of Athens.

Banksy, through his graffiti, was recommended to the public as the most challenging person of the 21st century.

Maintaining his anonymity at all times, he painted walls from Palestine to New Orleans, while his idiosyncratic art portrays him on the galleries of the entire planet beyond the streets of London where he created his myth.

A visionary, genius, activist, director, “vandalos”, a violent foe of capitalism and hyper-consumerism, but above all a street artist, immediately grabbed the eyes of public opinion and art critics with his unique aesthetic and critical glance get him. The latter, together with the journalists, after having performed a merciless effort to reveal his real identity, soon realized that he was the most interesting artist / icon of pop culture from the case of Andy Warhol.

By pointing to his images the bad texts of the western capitalist world demanding overexploitation of goods, 24-hour monitoring of people and movements, pro-policing and unnecessary use of violence to any dissident, there was a stench-speaker voice and images of an attractive dystopian. He has never ceased to defend the value of anonymity at a time when everything is recorded.

His works are being sold on seven-digit money as the balloon girl at the recent auction of Sotheby’s (over £ 1 million), and he does not hesitate to destroy them in front of the astonished eyes of those watching by longing for something that bears his signature .

The World of Banksy – Live the Experience 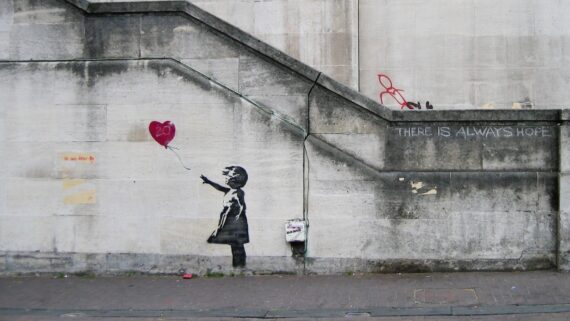